The newest amateur women’s team in San Antonio has just completed their first round of tryouts. Alamo City Soccer Club (SC) will be kicking off their inaugural season in the WPSL. Last summer the Blossoms were the only amateur women’s team in town. Alamo City will be competing in the Red River Conference of the WPSL. This summer, San Antonio women’s soccer is looking to be hot.

The Alamo City SC WPSL team is part of the Alamo City SC family, with home fields at Alamo Sportsplex and Culebra Creek Soccer Park on the Northwest side of town. While the team is part of the club, it is not limited to only players from the club. The player pool at the tryouts only contained a few of their club team players. The coaching staff is excited to bring such a high level of the sport to the Northwest side of town. Assistant Coach Neal Hull saw “the girls were excited for this on this side of town.”

Head Coach Brian Davis was watching local WPSL matches last season. He was in the bleachers watching the Tti versus Blossoms game last summer in Houston. Davis was doing his due diligence scouting the competition his team would be facing. Whether this stems from a competitive streak or his former military time, he was stationed at Lackland for a stint, he will be knowledgeable about his competition before he ever faces them on the field.

One of the visions Davis has was converting one of their practice fields into a showcase field, including turning it in a different direction. That vision is in the process of becoming a reality, equipped with bleachers, lights, fences, and sod, to be complete by their first game. Davis sees the new field and team as being a family friendly environment to eat and catch a game on a summer night.

Alamo City SC held their first tryouts January 20 and 21. There was a good showing of 40 young women between both nights. The players ranged in age and home field, from UTSA and UIW to women’s league, high school, and a high school coach. Hull noted, “It was a strong, diverse group of payers representing different high schools in three different districts, and three generation of Reagan players. It was good seeing the interaction as they realized they had all played at Reagan.” Davis thought the tryouts “went well. The quality of play was nice, and the D1 players were impressed by the other players.” This player pool can only improve as word spreads about the team and tryouts. There is a strong UTSA connection, where Davis has been an Assistant Coach with their Women’s program since 2015. There is a sense that every player would have to earn a spot on the roster and there were no freebies. “We are playing to win,” Davis said of the team. 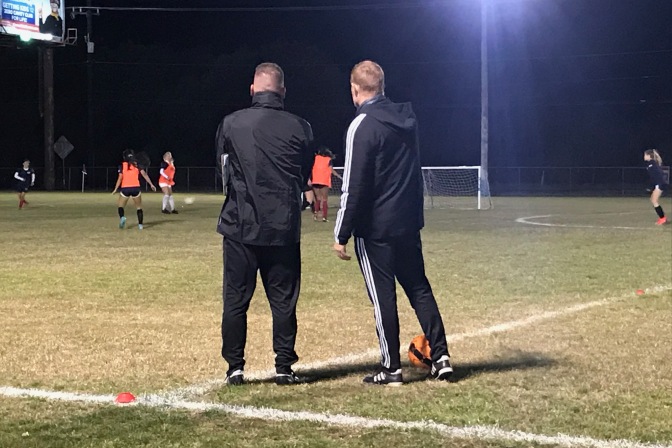 Davis is serious with his coaching and support staff. Neal Hull, Assistant Coach, has 28 years of coaching experience and several Coach of the Year honors, is licensed through USSF and the English FA, and he trains other coaches and has Tony DiCico as a reference on his website (https://www.pass1on1.com/director-of-coaching.html). David Cavazos is the goalkeeping coach for the team. Cavazos is a San Antonio boy: attended Marshall HS, UIW, SAC, played for SA Pumas, and is currently coaching at OLLU. Davis plans on bringing in a trainer and ice baths out to the complex to aid in the healing process as games are often back to back on weekends.

Davis has a clear vision for the team and the athletes. He continued to share other plans for the near future, showing that San Antonio has another team committed to growing the sport for women to elevate their skills and represent San Antonio in college or overseas (Alamo City SC have some connections in this area, too.)

They will be having more tryouts in February, March, and April and will release their first signings in March in accordance with league guidelines.

View all posts by Danielle Gawronski